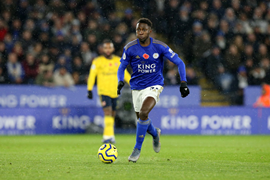 The top ranked Nigerian player in the rankings is Leicester City midfielder Wilfred Ndidi (323), putting him in 66th position along with Manchester City star Bernardo Silva and Fenerbahce's Serdar Aziz.

The Super Eagles midfielder has been influential for the second-placed team in the English Premier League this season, going the distance in all but one of their matches and scoring twice in his first six games of the season.

The second best Nigerian player listed is Queens Park Rangers attacking midfielder Eberechi Eze, who is having his best season as a professional, netting 9 goals in 20 Championship games while providing four assists.

Joint-top scorer in the Dutch Eredivisie, Cyriel Dessers comes next with an InStat Index of 301, one less than Eze.

It is worthy of note that the aforementioned Nigerian players are aged twenty-five or under.