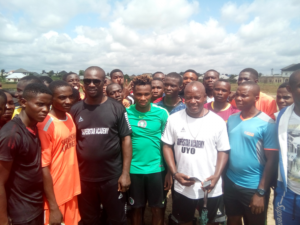 Super Eagles star forward Samuel Chukwueze has been named the honourary president of Super Stars Academy following his exploits for Nigeria in the 2019 African Cup of Nations.

The 20-year-old was one of Nigeria’s best players at the just concluded continental showpiece where the Super Eagles finished third, playing a pivotal role in the knockout stages against Cameroon and South Africa where he scored the opening goal.

In a reception organised in his favour by the president of Super Stars Academy, Prince Victor Apugo, in Uyo where the Academy is based, Apugo announced the Villarreal star as honourary co-president of the club.

In his acceptance speech, Chukwueze expressed his delight for being honoured by Super Stars Academy and also thanked Apugo for the huge role he played in discovering him as a young boy in the streets of Umuahia, and the role he’s still playing in his life as a mentor.

The former junior international emphasised that humility and hard work is the key to success and advised the budding talents at the academy who wish to follow in his footsteps to stay humble, work hard and listen to instructions.

Chukwueze who is a subject of transfer interests from some of the biggest clubs in Europe recently joined the sports management unit of American rapper, JAY-Z’s company, Roc Nation.