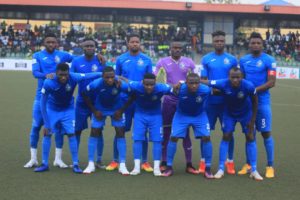 Enyimba pair of Reuben Bala and Stanley scored a brace each as Enyimba eased past Rahimo of Burkina Faso 5-0 in a CAF Champions League preliminary round return leg match on Sunday in Aba,

There was early sign of danger for the Burkinabe champions when their numerical strength was reduced nine minutes after the kick off.

Zonon Issouf who provided the lone goal that nailed Enyimba in the first leg, was flashed a straight red card by the referee for stamping his foot on Enyimba’s Ghanaian defender, Emmanuel Ampia.

Enyimba tried to make their numerical advantage count, pouring into the visitors area like locust invasion.

But still buoyed by their first leg 1-0 advantage, Rahimo defended stoutly, with virtually every yellow shirt falling behind the ball time and again with occasional counter attacks.

However, Enyimba thought they had gotten the breakthrough in the 24th minute when captain Godwin Abalogun expertly planted his left-foot shot into the top far corner. And as he turned to celebrate, the goal was ruled out by the second assistant referee’s flag, adjudging Stanley Dimgba who provided the assist was in an offside position.

The breakthrough for the People’s Elephant eventually came a minute past the half hour mark when Reuben Bala fired an incredible free kick into the far corner despite a crowd of defenders and even his own teammates with goalkeeper Traore Moussa fully stretched to his left hand side.

The goal cancelled out their first leg deficit and provided the soothing balm for the two time African champions to comeback into their dominant fashion.

Credit should go to the visitors who despite going one man down early in the game, still rebuffed all that their hosts threw at them.

They came close to drawing level in the 38th minute when a cross from the left was not properly dealt with by defender Nelson Ogbonnaya, providing Cisse Mody with a glorious opportunity to test goalkeeper Afelokhai from close range.

The Nigerian short stopper reacted brilliantly finger-tipping the over his top left.

The People’s Elephant went into the halftime break one goal up, with both teams tied 1-1 on aggregate.

Before the restart for the second period, Enyimba introduced Stanley Okorom in place of Emmanuel Ampia, a decision necessitated by the pains inflicted by Zonon Issouf’s stamping on his lower abdomen.

And Okorom made an instant impact as when he doubled Enyimba’s lead on 46th minute with a cool finish inside the area.

With 2-0 advantage, and 2-1 on aggregate, Enyimba refused to pull off the throttle even as the Rahimo players abandoned their defensive approach in search of an away goal.

But it was Enyimba who came close to getting a third goal on 69th minute when Cyril Olisema forced an audacious save from goalkeeper Traore Moussa who pushed the ball against the woodwork for a corner.

Stanley Dimgba put his name on the scorers sheet in the 78th minute, cutting in from the left to fire into the top corner.

It was kind of insurance goal, one that put Enyimba one leg into the next round of the competition.

Despite a 3-0 lead, and 3-1 on aggregate, Enyimba kept surging forward and with only four minutes left on the clock, Reuben Bala got his brace of the night with a ferocious low strike from 35 yards out.

That fourth goal drained all the remaining spirit in the Rahimo team players who now believe it was game over.

However, Stanley Dimgba equally got his brace on the night and Enyimba’s fifth goal when he was set up by Stanley Okorom from a corner kick. It was a case of one Stanley assisting another Stanley to score.

With this 5-1 aggregate win, Enyimba have sealed a place in the Second Preliminary Round of the 2019/2020 CAF Champions League and would meet the winner between All Hilal of Sudan and Rayon Sports of Rwanda.

At the Baba Yara Stadium, Kumasi, Kano Pillars fell to a 2-0 loss to their hosts Asante Kotoko of Ghana.

The Sai Masu Gida exited the competition 4-3 on aggregate. They won the first leg in Kano 3-2.

Kelvin Andoh and Emmamuel Gyamfi were the goal scorer for Asante Kotoko.