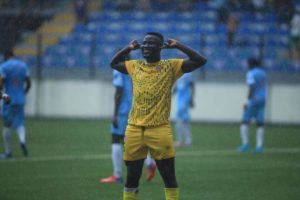 Following his brace on his debut for Kwara United in their 3-0 first leg win against AS Douanes in the preliminary round of the CAF Confederation Cup in Lagos, former Plateau United striker Wasiu Jimoh revealed Tosin Omoyele has the one who inspired his goals celebration.

Speaking exclusively to Nigeriasoccernet.com, Wasiu Jimoh said the former Enyimba International FC striker is a friend he admires a lot.

"Tosin Omoyele inspired me to do that celebration.

"He is my friend that I admire his goal scoring sense a lot and any time he scores that is the way he celebrates and I love the celebration as well."

He also did talk about his brace for Kwara United at the Mobolaji Johnson Arena Lagos.

"I feel very happy about the goals because it every player's dream and it something I have been looking forward to."

"The only thing running through my mind at the time I was about to take the penalty for my first goal on the evening was just to put the ball inside the net so we could extend our goal advantage."

"I did that because I wanted a new challenge and also more playing time."

Wasiu Jimoh concluded the chat talking about the high spirit in the camp of the Harmony Boys as they prepare for the second leg coming up this Sunday in Niamey.

"It going to be a different ball game and it going to be difficult game as well but we are prepared mentally and physically for it.

"The spirit is high and right now what we are thinking about is victory because we want to win."

Wasiu Jimoh will hope to lead Kwara United to victory in the second leg against AS Douanes in Niamey come Sunday.