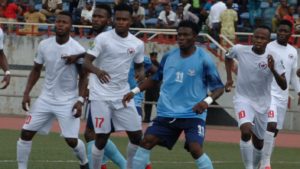 The Flying Antelopes put up a fine late showing but it resulted to nothing as they remain winless after two games.

Enugu Rangers made it two Caf Confederation Cup defeats on the spin as they bowed 4-2 to Al Masry on Sunday.

The Flying Antelopes went to Egypt with the ambition of breathing life into their campaign after a 3-1 home defeat to Pyramids, however, a pitiable first half saw them return home empty-handed.

Al Masry made their intentions to win clear after taking a fifth-minute lead through Nigeria’s Austin Amutu at the Alexandria Stadium.

Ahmed Yasser made it two for the Boss of the Canal in the 27th minute before Muftah Taktak added to Rangers’ misery three minutes into the second half.

While it looked like the Nigerians would return home with basket full of goals conceded following Hassan Ali’s 83rd-minute strike, Eziekwe Chinoso and Saidou Simpore’s own goal gave the visitors something to cheer about.