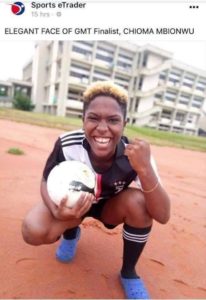 Chioma Mbionwu, a promising Nigerian footballer who was shot dead by yet-to-be-identified gunmen on October 3rd will be interred on October 28. Mbionwu, who hails from Orunba North Local Government Area of Anambra State, was killed by stray bullet around Nnamdi Azikiwe University (UNIZIK) Campus Gate at Nnewi, Anambra State. The deceased, aged 20, was a 300 level student of Medical Rehabilitation, UNIZIK.

POLITICS NIGERIA understands that late Mbionwu participated at an edition of the GTB Principals Cup. She was regarded as an athlete with great prospect.

The rising insecurity in the South-east occasioned by attacks on security and public infrastructure andacts of extra-judicial killings have turned the region into a hotbed of violence.

Between January and April 19, 2021, over 17 police stations, in addition to a correctional facility, have been targeted by the gunmen, leaving in their trail dead officers, charred police stations, freed prison inmates, and empty armoury.