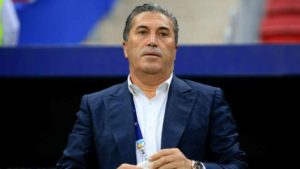 The Portuguese coach has been handed an initial two-year contract and will begin work immediately, but only in an observer capacity. Interim coach Augustine Eguavoen will lead the team to the Africa Cup of Nations in Cameroon before returning to his role as the country's technical director after the tournament.

"The Executive Committee endorsed a proposal for the appointment of Jose Peseiro as the new Head Coach of the Super Eagles," a statement from the Nigerian Football Federation (NFF) said on Wednesday.

"However... Augustine Eguavoen, named the interim Head Coach, will lead the Super Eagles to the AFCON 2021 in Cameroon with Peseiro only playing the role of observer."

Peseiro, 61, began his coaching career in 1991 as a player-coach with Union Santarem in the Portuguese fourth tier. His big break came in 2003 when he was named as an assistant to compatriot Carlos Queiroz at Real Madrid. After the pair were fired, Peseiro was appointed by Sporting, leading them to a third place league finish and the UEFA Cup Final, which they lost to CSKA Moscow.

During his 15-year career, Peseiro has coached clubs in Portugal, Spain, Saudi Arabia, Greece, Romania, United Arab Emirates and Egypt, in which he has won two titles -- the Egyptian Premier League with Al Ahly in 2016, and the Portuguese Cup with Bragain 2013.

At international level, he has coached Saudi Arabia and Venezuela. He failed to guide Saudi Arabia to qualify for the 2010 FIFA World Cup in South Africaand was dismissed after losing to Syria in the AFC Asian Cup.

He failed to get Venezuela past the group stages of the 2021 Copa America, tallying two draws and two losses.

NFF Vice President Shehu Dikko told ESPN that Peseiro's vast experience across multiple countries and continents, including Africa, gave him the edge among other candidates.

"He has coached across the world, in Asia, in Europe, South America, in Africa," Dikko said.

"He has worked with big coaches like (Jose) Mourinho and (Carlos) Queiroz, coached at a big club like Real Madrid, coached big players and small players, coached in the World Cup qualifiers, UEFA Cup, UEFA Champions League and so on. He is also well educated, with a masters degree in sports science.

"He might not have won anything, but we believe he will bring value to our team."

Dikko confirmed that the NFF did speak to Roma boss Jose Mourinho about Peseiro, but only because he was listed as a reference.

"Among the coaches who applied for the job, three of them listed Mourinho as their reference, including Peseiro and we spoke to him based on that and he gave a glowing reference."

"If he does not qualify us for this World Cup, we will review the situation objectively and make a decision based on that," Dikko said.

Nigeria are grouped with Egypt, Sudan and Guinea-Bissau and begin their Nations Cup campaign against Egypt on Jan. 11. They then face Sudan on Jan. 15 before rounding up the pool play against Guinea-Bissau on Jan. 19.