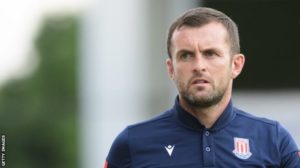 Welshman Jones, 46, was brought in from then League One Luton Town in January to replace the sacked Gary Rowett.

But Stoke have won six times in 38 games under Jones and, despite back-to-back wins in mid-October, Saturday's defeat by Rowett's Millwall left the Potters four points adrift of safety.

Stoke, who face leaders West Bromwich Albion next, are 23rd in the table.

But the Potters could be back on the bottom by the time they play that game on Monday as Barnsley, who are level with them on eight points, face Bristol City at home on Friday.

Assistant manager Paul Hart and first-team coach Joaquin Gomez have also left the club, with Rory Delap, Kevin Russell and Andy Quy taking charge of the first team while a new manager is sought "as swiftly as possible".

"I would like to thank John and Peter Coates, firstly for the opportunity to manage this football club and then for the continued support and patience throughout my time here," Jones said.

"I would also like to thank the supporters for their fantastic support. Finally, I wish the club the very best for the future."

Jones enjoyed huge success at Luton, winning more than half his games in charge of the Hatters.

But he failed to arrest a decline at Stoke that was set in motion while Mark Hughes was still manager - and then included relegation from the Premier League in 2018.

Success, stability and the start of the struggle

Pulis was appointed as manager for a second time in 2006 and guided the club back to the top flight two years later after a 23-year absence.

They never finished lower than 14th in five top-flight campaigns under Pulis. But with increasing dissatisfaction among supporters about the playing style and an inability to challenge in the top half, Hughes replaced his fellow Welshman Pulis in May 2013.

The former Blackburn, Manchester City and Wales manager guided Stoke to three straight ninth-placed finishes - their best in the top flight since 1975.

But after lavish summer spending, the Potters then dropped to 13th in their final full season under Hughes, who was sacked in January 2018.

Hughes' replacement Paul Lambert came in on a two-and-a-half-year contract, but the Scot lasted just four months, having conjured just two wins from 15 games as he failed to keep the Potters up.

Rowett did not fare much better, managing just shy of eight months in charge of a side installed as pre-season favourites for the Championship title.

He oversaw just eight wins in their 26 league fixtures, before being sacked with the Potters 14th.

Enter Jones, whose success at Luton saw him arrive with a reputation as an emerging young managerial talent who would bring a long-term vision and much-needed stability.

But Stoke's struggles have continued under his management, with numerous individual defensive errors and a lack of goals contributing to their awful start to the 2019-20 season.