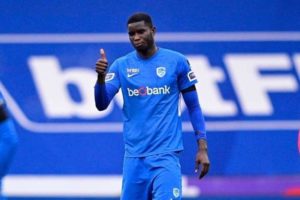 A scan has confirmed that Genk striker, Paul Onuachu, will be out of action for at least four weeks after he suffered a muscle tear.

The injury has effectively ruled him out of next month’s AFCON in Cameroon.

Onuachu was forced out of the Genk clash against Antwerp at the weekend after he tore his left thigh muscle.

Genk coach Bernd Stock lamented: “I should have replaced him earlier. However, Paul wanted to continue, he thought there was still some in the tank. Unfortunately, in one of his many sprints, he grabbed his left leg.”

Onuachu has netted 12 goals in the Belgian league this season.