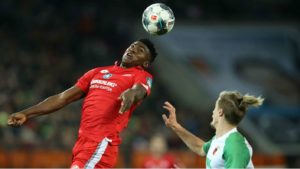 Taiwo Awoniyi continues to enjoy his permanent move to Union Berlin and last Saturday at a full and bustling Stadion An der Alten Foersterei where he led Union to a 2-0 win over their city rivals, Hertha. Awoniyi pounced on a defensive mistake in the eighth minute to give Union the lead, which they never relinquished.

It was Awoniyi's eighth league goal in 12 Bundesliga appearances and his highest ever in any top-flight European league. His best tally before Saturday was the seven goals he scored for Excel Mouscron in the 2017/18 and 2018/19 seasons in Belgium and he also became the only player in Union history to have scored eight goals in the Bundesliga.

This was the first time the Berlin derby was played in the Bundesliga before a stadium full of fans. Awoniyi was on the pitch for 82 minutes before he was subbed off for Sheraldo Becker. Union are fifth on the table with 20 points from

Paul Mukairu scored in first half added time to bring Antalyaspor level away to Hatayspor last Saturday at the Yeni Hatay Stadyumu but the second-placed team in Turkey hit back with two second half goals to take the tie 3-1.

It was the 21-year-old Nigerian's second goal of the season in 10 league appearances and he was substituted by Gokdeniz Bayrakdar in the 67t minute. Antalyaspor are 13th on the table with 15 points from 13 matches.

Akintola gets second of the season

Babajide Akintola scored his second to help Adana Demirspor to a 3-1 win away to Altay on Saturday at the Bornova Aziz Kocaoğlu Stadyumu. Akintola was denied a goal of the season contender in the first half when he picked the ball in his half and ran almost the entire length of the pitch but his shot was saved.

He scored but it was ruled offside but the 25-year-old would not be denied in the 60th minute as he tapped into an empty net for his second league goal of the season. Adana are 10th on the log with 19 points from 13 matches.