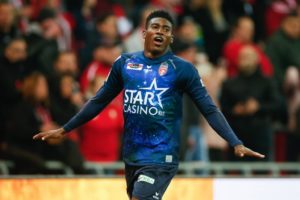 Nigeria forward Tawio Awoniyi has linked up with German side, FSV Mainz on a one-year loan deal from Liverpool, Completesports.com reports.

“✍️ We have agreed a deal to sign Taiwo Awoniyi on loan from @LFC for this season, subject to international clearance and a medical,”reads a tweet on the club’s official Twitter handle on Tuesday.

Awoniyi joined Liverpool in August 2015 for a fee of around £400,000 but is yet to play an official game for the current European champions.

He is currently a member of the Nigeria’s U-23 side.