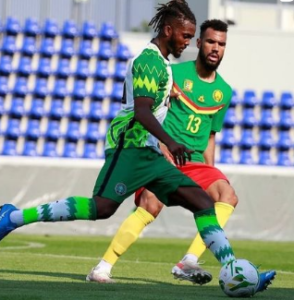 Boavista loanee Chidozie Awaziem was relieved after Nigeria made it to the playoff round of the 2022 World Cup qualifiers following their 1-1 draw with Cape Verde at the Teslim Balogun Stadium in Surulere, Lagos.

The Super Eagles did just enough to qualify for the next round, topping Group C with thirteen points, two more than closest challengers Cape Verde, who finished on eleven points.

Victor Osimhen opened the scoring less than one minute in but the lead lasted five minutes as Ianique dos Santos Tavares restored parity for the visitors.

Awaziem has emerged as one of the unsung heroes in Gernot Rohr's team and gave a good account of himself against the Blue Sharks.

The 24-year-old is aware that the 1-1 draw against a composed Cape Verde team is not an outcome most Nigerians would be proud of and has identified the aspects of the game in which the Super Eagles in order to make it to the 2022 World Cup.

"I feel happy, I feel impressed. Thank God we qualified which is the most important," Awaziem told Channels TVpost-match.

"I need to be at my best for Nigeria because this is my country and I need to fight for everyone.