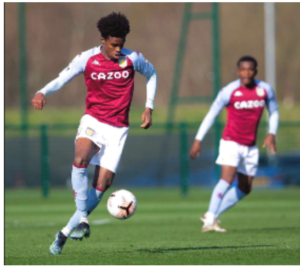 Aston Villa manager Steven Gerrard has given an update on the situation of Carney Chukwuemeka amid speculation linking the England U19 international of Nigerian descent with a departure from the Lions this summer.

Chukwuemeka is considering his future at Aston Villa due a lack of first team opportunities and is being monitored by clubs in the Bundesliga.

Since the start of the 2022, the Anglo-Nigerian has logged only 115 minutes in the Premier League from a possible 1,530 minutes, and his most recent outing off the bench was against Liverpool last night.

Chukwuemeka will enter the final one year of his contract with Villa on July 1, 2022 and is reportedly looking for another challenge.

Liverpool legend Gerrard has predicted that Chukwuemeka will be a big player for Aston Villa, if he commits his long-term future to the club.

Quizzed on the future of Chukwuemeka, Gerrard was quoted as saying by Birmingham Live : "He's hopefully going to be a big player for Aston Villa. We want him to stay here long-term.

"We believe it's the right place for Carney and, again, myself and the staff have shown huge trust putting an 18-year-old in but we wouldn't do it if we didn't think he was ready, or have the ability not to cope. "

A central midfielder with an eye for goal, Chukwuemeka finished the 2020-2021 season as Aston Villa's top scorer in the FA Youth Cup with seven goals and was named the Academy Player of the Season on the back of his brilliant performances