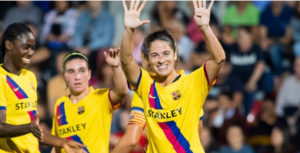 The Super Falcons star was without her scoring boots in Italy but her team still had enough in the armoury to defeat Juventus 2-0 at the Stadio Moccagatta on Wednesday night in a UEFA Women Champions League first leg playoff.

Asisat Oshoala played the final 20 minutes, coming in for Patri Guijarro with the scores at 1-0, as Barcelona put one solid foot in the next round of the Champions League thanks to goals from Alexia Putellas and Marta Torrejon

A goal in each half against Juventus, who also paraded former Chelsea attacker Eniola Aluka, has taken FC Barcelona Femeni a big step towards repeating last year’s feat of appearing in the final.

Beaten finalists last May, Barcelona head back to Spain with a two goal advantage on the same night that European champions Olympique Lyon handed a 9-0 humiliation to VDV Ryazan.

VfL Wolfsburg also got in on the high scoring spree by mauling Mitrovica by ten goals to none.

In other results, Bayern Munich Women fought out a 2-1 win to Goteborg in Sweden while Minsk edged a close encounter at home to Zurich