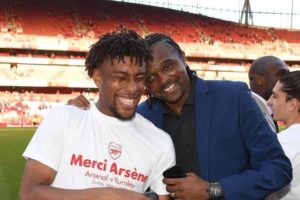 Iwobi agreed a five-year contract with Marco Silva’s men in a deal worth £40 million ($49m) that was disclosed on Thursday.

The Nigeria international has been a Gunner since joining the academy 15 years ago. Thanks to Arsene Wenger, he came through the ranks and made his senior team bow on October 2015.

He went on to make 148 appearances, scoring 15 goals winning one FA Cup and two FA Community Shields in the process.

Kanu, a club legend was among those to use social media to bid farewell to the departing forward, and claimed he would be supporting him.

“Once a Gunner, always a Gunner. We are proud of you Alex Iwobi and will continue to support you. Good luck with your new club,” he tweeted.

Iwobi joins Moise Kean in a new-look front line for the Toffees. He is expected to make his bow when Everton face Crystal Palace in their season opener on Saturday.