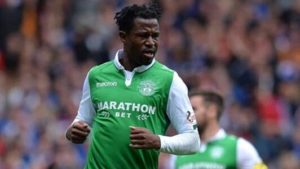 Nigeria defender Efe Ambrose is set to leave Hibernian for free this month, according to the Scottish Sun.

Ambrose has rejected new terms to extend his stay beyond the expiry of his present contract in the summer and could now activate a release clause allowing him to leave for nothing from January 1.

English Premier League side, Cardiff City are said to be interested in strengthening their defence with the former Celtic centre-back and are monitoring the situation

The 30-year-old was a target for Turkish outfit Trabzonspor in the summer.

Neil Warnock’s Cardiff City – three points clear of the English Premier League relegation zone – are said to have shown an interest in the stopper in recent months.

Ambrose was a key player for the Easter Road side last season, making 45 appearances as Neil Lennon’s men finished fourth in the Scottish Premiership.

Ambrose’s departure would cap a miserable few days for Hibs gaffer Lennon, who watched his side lose the Edinburgh derby to Hearts thanks to Olly Lee’s winner.