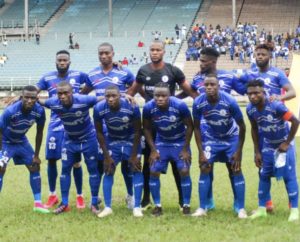 Nigeria’s Rivers United FC have revealed in a statement that they have been receiving many threats from Al Masry fans ahead of their clash in the CAF Confederation Cup.

Al Masry suffered a 2-1 defeat to Nigeria’s Rivers United at the Enyimba International Stadium in the first leg of the CAF Confederation Cup playoffs.

Al Masry vice president Mohamed El-Kholy revealed after the game that they would be filing a complaint against The Pride of Rivers for the poor treatment they received during their stay in Nigeria.

As they prepare to travel to Egypt to face the Port Said giants this Sunday, 5 December, Rivers United revealed in an official statement that many of the club’s delegation were denied visas in an attempt to destabilize the team before the encounter

Additionally, they claim that they were informed that Covid-19 tests will be manipulated in order to further weaken the team.

As a result, Rivers United have decided to contact the Confederation of African Football and the Foreign Affairs Commission and the Nigerian Embassy in Egypt to inform them of the situation.

“In what is fast unfolding as yet another ugly chapter in African football as Rivers United has decried the antics of Egyptian side Al Masry ahead of this weekend’s CAF TotalEnergies play-off return leg clash in Alexandria.

“The Pride of Rivers raced to a 2-1 victory in the first leg at the Enyimba International Stadium in Aba and know a draw or victory will be good enough to progress into the group phase of the competition.

“Ahead of this weekend’s encounter, Rivers United has uncovered plots by Al Masry to unsettle the team, speaking on the progress of preparation, Media Officer of Rivers United, Charles Mayuku, revealed that some members of Rivers United contingent for the tie have been denied entry visa into Egypt by the Egyptian Embassy, including two journalists.

“In addition, Al Masry football club in various official social media posts and their corresponding fans’ comments have threatened to hurt members of Rivers United during their visit. Threat statements like “we will kill you,” “welcome to hell,” and photos of knives, machetes, and flares dominated comments below Al Masry’s official post

“To rub salt to wound, Rivers United has also gotten wind that Covid19 test manipulations will also be employed to further weaken the resolve of the team.

“To this effect, Rivers United has drawn the attention of Africa’s football governing body, CAF in writing, through the Nigeria Football Federation, as well the Foreign Affairs Commission and the Nigerian Embassy in Egypt to this unsavoury and barbaric scheme.

“The team remains focused and are set to jet out of Nigeria on Thursday for Sunday’s action which is billed to kickoff at 5pm Nigerian time.”